Who owes what to whom

What is the difference between moral obligation and debt? 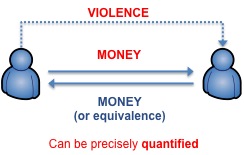 The author of Debt: The First 5,000 Years points out the profound moral confusion and the resultant justifying of violence:

"Majority of human beings hold simultaneously that (1) paying back money one has borrowed is a matter of morality, and (2) anyone in the habit of lending money is evil."

"Money’s capacity to turn morality into a matter of impersonal arithmetic....", (and justify violence against one who fails to pay up.)

Posted by Heung Joo Choi at 1:05 PM No comments:

The following is "Abundance Pyramid" by the authors of Abundance: The Future Is Better Than You Think

Actually, no wonder the authors of the great book rely too much on so-called "techno-philanthropists" for funding resources, and, unfortunately, ignore sexuality...

They say, "... (when it comes to 'abundance') it is not an issue of scarcity. It is an issue of accessibility."

Here is one of great questions we have to answer...

"Self-government, so-called, is the art of governing government. It has been slowly and painfully developed. Now, through an Open Sesame to tyranny offered by the universal ignorance of money, it is threatened with becoming a lost art. The state's modern method of deceiving the citizen with counterfeit money menaces civilization through a confusion of monetary tongues and renders society unfit for self government until its ignorance of money shall be dispelled and government of government restored by the separation of money and state. In view of the transcendency of this issue, where is there a friend of freedom who will not give its solution priority over any and all other reforms?"